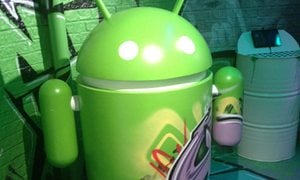 Meanwhile, Google says that more than 1.5m new Android devices are being active
ated every day, it’s nearing 1bn activated in total so far, and that by the end of this year, that total will include more than 70m Android tablets.

Big. Yet a lot of apps still come out for Apple’s iOS first or even exclusively. Right now, if you own an iOS device, you can play Plants vs. Zombies 2, Clash of Clans, and Worms 3, but Android owners can’t.

Instagram launched on Android 18 months after iOS. Nike’s Nike+ FuelBand still hasn’t leaped. Mailbox and Tweetbot are still no-shows, and while much-praised children’s app-maker Toca Boca has 18 apps available on iOS, only one of them is also on Android Mexico.

This week, yet another research firm, Canalys, fuelled the flames of this debate by pointing out that 30% of the 50 top paid and 50 top free iPad apps aren’t also available on Android – although 11 of the 30 un-ported apps were made by Apple. Hence, their Android-less status is hardly a surprise.

So what’s going on? If you’re one of the millions of new Android users wondering why you can’t get some apps your Apple-owning friends can, here are some reasons, an analysis of whether they’re fair, and some optimistic thoughts on why this may change.

Developer concerns about costs and complexity

What? Developing iOS apps means ensuring they work nicely on a small range of iPhones and/or iPads: generally, 6-8 different devices depending on how far back the developer wants to go.

On Android, it’s a different story: nearly 12,000 different devices out there in the hands of people, with a wider range of screen sizes, processors, and versions of the Android software still in use.

Many developers’ lack of enthusiasm for Android is down to concerns about the costs of making and testing their apps for it and the resources required to support them once they’re launched if emails flood in about unspotted bugs on particular models.

Is this fair? As it’s called, fragmentation may not be solved, but it’s become a more manageable problem – and thus a less convincing excuse for avoiding Android altogether.

Improved development tools are making porting easier, and there’s more data (including Google’s own) to help developers decide which Android devices to focus their energies on first. If they’re upfront with users about which phones and tablets their app will work on, the support queries’ aspect becomes less daunting too.

That said, many developers still prefer to launch on iOS, iterate their app over a couple of updates in response to feedback from their users, then tackle Android – with extra time for testing to ensure the app works well and has Android-specific features (widgets, for example). You could argue that these developers are making more effort to serve Android users, not less. But that may not make the wait for some apps less frustrating.