The third installment in a children’s book series follows the adventures of twin amateur sleuths who build several science spy gadgets to aid them in their quest to solve a mystery. The summer holidays are only two weeks along, but 11-year-old Nick Holt already misses his parents. In Nick and Tesla’s Secret Agent Gadget Battle by Bob Pflugfelder and Steve Hockensmith [Quirk Books, 2014; Amazon UK;

Amazon US/kindle the US]; we learn that Nick is convinced that someone is spying on his twin sister, Tesla, and him. His paranoia grows after their mother leaves them a voicemail warning of danger, but before he hears who they are not supposed to trust, the message is mysteriously cut off in midsentence. This is the first communication the twins have received from either of their parents since they arrived at their Uncle Newt’s house in California, so they listen to it over and over again, anxiety growing until it is somehow erased. 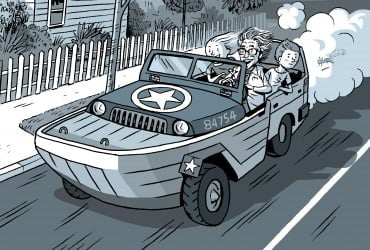 Shortly after the disappearing voicemail incident (completely unrelated to the News of the World phone-hacking scandal and trial), an offbeat cast of characters shows up, uninvited, to restore Uncle Newt’s cluttered house to some semblance of habitability. Strangely, they all show up on the same day. (That the twins’ eccentric and seemingly scatter-brained Uncle Newt was completely unaware that these people were coming is not viewed suspiciously.) These characters include a “scientist intern“ who clearly is not Australian, as he claims, an exterminator who pokes through the entire house for bugs and two mop-wielding harridans. At this point, Nick’s paranoia has become contagious since most readers would be certain anyone or all of these people be a spy.

But never underestimate the creativity of two imaginative 11-year-olds when confronted by the inexplicable. With the help of their new friends, neighborhood kids Silas and DeMarco, Nick and Tesla make their own spy toolkit (and teach you how to do so too); they create fingerprint dust and collect and save fingerprints, build invader alarms and hide spy camera traps, design codex wheels for writing coded messages to each other and make balloon drop booby-traps.

Along the way, Nick and Tesla search for Tesla’s missing necklace — why does Tesla’s necklace always go missing in these books? They also come face-to-face with an irate neighbor (whom Nick identifies as a spy), black banana goo, a broken garden-gnome, a mud-splattered bike, and of course, jumping off a roof.

Despite taking place during just one-and-a-half days, the pacing of the story-telling is consistent with the previous two books. Overall, this mystery focuses upon spy-spotting and sussing out the purpose for why anyone would spy on Uncle Newt and the children. Although we do learn the identity of the spies by the end of the book, more interesting is what we learn about Uncle Newt — and no, I am not going to spoil the surprise by telling you what that may be!

We finally learn that Nick and Tesla’s parents are researchers — but they don’t study soybeans — and they are involved in some sort of top-secret science project, which explains the spies. Well, sort of. But we learn nothing about their whereabouts or fate, so the reader is left to wonder what happened to Nick and Tesla’s parents? After three books’ worth of wondering about this and other questions, we really are not much closer to knowing anything more than we were after reading the first page in the first book. This tertiary addition to the ongoing series about Nick and Tesla’s truly remarkable summer vacation will be enjoyed by children and their parents everywhere. I can hardly wait for the next book in this series.